Sicario 2: Soldado is the exhilarating follow up to the critically acclaimed Sicario starring Emily Blunt and directed by modern-day master Denis Villeneuve – of Prisoners and Blade Runner 2049 fame. The sequel is once again written by Taylor Sheridan and features his unique and recognisable dialogue which has enticed countless critics throughout his monumental career. Sheridan manages to create a script which supports the narrative and provides contextual information for people who aren’t familiar with the first film, making Sicario 2 work as a stand-alone while also keeping its ties to the predecessor to impress long-time fans.

In Sicario 2, the war on drugs at the US/Mexico border is still raging on. The smuggling of terrorists has created a new threat to the US government – which is shown to be extremely corrupt – where Josh Brolin’s character, Matt Graver, is tasked with kickstarting a war between major drug cartels to eliminate them. This plotline is almost pushed away at the midpoint of the film to make up for an unpredictable side story which took many different turns. In a way, the film suffers due to this as it loses its pacing and sense of direction, however the intense action and final act of the sub-story more than makes up for its brief incoherency. 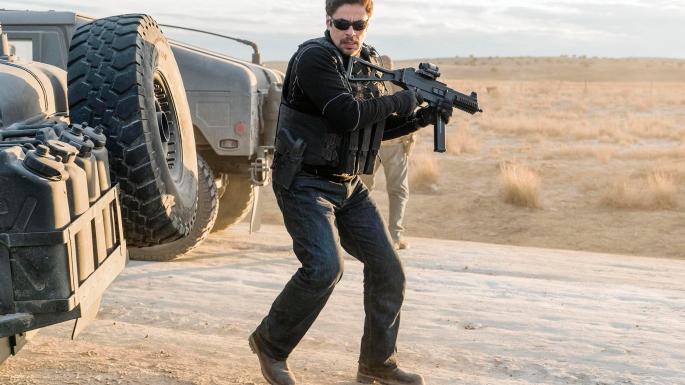 What really works about Sicario 2 is Sollima’s ability to tell an interesting story, while also providing an effective social commentary which blurs the line between good and bad, and who the heroes really are – if there are any… We see a conflict which completely splits audiences down the middle with its dense subject matter and controversial topics. This is where Sicario 2 really stands out.

Benicio Del Toro’s performance as Alejandro is marvellous and electrifying. His charismatic character is badass and entertaining, and Del Toro conveys this in such a realistic fashion that just showcases his supreme talent. Brolin, as the second protagonist, is also excellent. His character isn’t as exciting as his counterpart, but he definitely makes up for it with his radical and extreme temperament and evil interrogation methods – as seen in the first ten minutes!

Hildur Guðnadóttir’s haunting score leaves you with a sense of fear and uncertainty after the credits begin to roll. The composition effectively provokes terror and dread, and the way the music is edited into the scene raises the hairs on your body.

Isabela Moner plays the daughter of one of the cartels kingpins. She is outstanding in the role – especially for her age. Her character is kidnapped for collateral damage after the war of the cartels is kicked off. We see her accompanied by Del Toro’s character and their chemistry is great. Both actors work really well together as we get to see their relationship develop throughout the latter half of the movie. You genuinely care about their characters because of the pristine portrayals provided by the stellar cast.

Overall, Sicario 2: Soldado, is an excellent thriller with socially conscious themes and a dark, grim premise which haunts you for hours after the film has finished. The top-notch cast is phenomenal and everyone does a fantastic job. The chilling score combined with a mind-blowing twist in the third act leaves you completely exhausted and mentally shaken. Sicario 2: Soldado is astonishing.

One thought on “Sicario 2: Soldado”